Businesses in the News 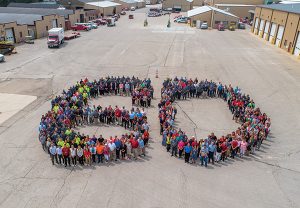 Michels Corporation said it is celebrating its 60th anniversary by dedicating the year to the people, projects and values that have helped the company grow from a regional gas distribution contractor into one of the largest utilities and transportation contractors in North America.
Michels was established in Brownsville, Wisc., by Dale Michels, a pipeline welding foreman with an entrepreneurial spirit. Today, the family-owned and operated company regularly works in all 50 states and has more than 8,000 employees and 40 offices throughout the United States and three in Canada.

MVP Holdings, based in Wichita, Kan., opened a Houston office to serve its growing customer base in the Permian Basin and South Texas. Clay Buford and Jamie George joined MVP as senior directors of Crude Oil Marketing and will work out of the Houston location, the company said.

Houston-based Gate Energy opened a new Singapore office, marking its first permanent location outside of the United States. Since opening its first office in 2000, the oil and gas engineering, commissioning and specialty field services company has grown to more than 400 employees.
Blue Mountain Midstream’s Wildcat subsidiaries launched an open season for new crude oil and water gathering systems and services in central Oklahoma. The initial crude oil gathering facilities will consist of 50 miles of pipeline, primarily contained within the dedicated area of nine contiguous townships in Canadian and Grady counties to be placed into service in phases starting in the fourth quarter of 2019.
Atmos Energy partnered with the Mississippi Public Service Commission to support natural gas expansion in rural parts of the state with a five-year program, during which time Atmos will invest up to $5 million each year.

People in the News

Pat Hickey has joined CECO Compressor Engineering (CECO) as a consultant in its the Training & Technical Services team. He brings more than 45 years in the natural gas industry specializing in software development, start-up and commissioning of new installations and troubleshooting existing control and automation problems.

Prairie Field Services announced Trent Bischoff has joined the company as vice president of Business Development in the Texas region, working out of its Orla, Texas, location. In his new role, Bischoff will be responsible expanding Prairie’s business in the region.
The board of Sempra Energy subsidiary Southern California Gas Company named Mia DeMontigny as chief financial officer, chief accounting officer, controller and treasurer of the company. Bruce Folkmann, who previously served in those roles at both SoCalGas and San Diego Gas & Electric Company, another Sembra subsidiary, will remain in that role at SDG&E.

Sergey Kupriyanov has been appointed the press secretary to the chairman of the Gazprom Management Committee. Kupriyanov, who joined Gazprom in 2003, most recently served as deputy head of the department. He succeeds Alexander Bespalov, who retired.

Gas Transmission Systems hired Ben Campbell as its vice president of District Operations. He has over 35 years of experience in the natural gas industry, working with utilities, and interstate and intrastate pipeline companies in engineering, testing and marketing.

Pacific Gas and Electric Company (PG&E) announced that vice president of Human Resources, Mary King, will also serve as the company’s chief diversity officer, overseeing the company’s diversity and inclusion efforts. King, an attorney and West Point graduate, joined PG&E 10 years ago in Labor Relations. She was previously at Calpine and Indianapolis Power and Light.

Matador Resources appointed Monika U. Ehrman to its Board of Directors. A professor at the University of Oklahoma’s College of Law, she also serves as an adjunct associate professor of Energy Management at its Price College of Business and as faculty director of its Oil & Gas, Natural Resources, and Energy Center. She started her career as a petroleum engineer before practicing oil and gas law at an international firm and as in-house counsel for two oil and gas companies.

Organizations in the News

A study by IHS Markit predicted at least 10,000 miles of new pipeline infrastructure will be needed in the next 30 years, and Texas Oil & Gas Association President Todd Staples told American Gas much of the activity will take place in the Permian Basin. The study suggested natural gas production in the Permian will increase to 24 Bcf/d by 2030, while NGL production will grow to almost 2.2 MMbpd by 2040.