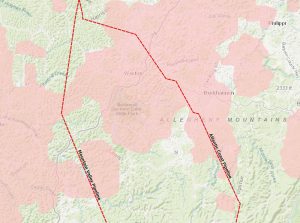 A U.S. appeals court vacated a permit by the U.S. Fish and Wildlife Service that allowed Dominion Energy to build its Atlantic Coast natural gas pipeline from West Virginia to North Carolina in areas inhabited by threatened or endangered species.
Dominion suspended construction of the long-delayed project in early December after the 4th U.S. Circuit Court of Appeals in Richmond, Va., stayed the Fish and Wildlife Service’s permit, called an incidental take statement.
The court found the Fish and Wildlife Service “fast-tracked” decision to reissue an incidental take statement in 2018, 19 days after federal energy regulators resumed formal consultation with the agency following the court’s decision to stay a version of the permit from 2017, 4th Circuit Chief Judge Roger Gregory said in the court’s opinion.
When Dominion started work on the 600-mile pipe in the spring of 2018, the company estimated it would cost $6-$6.5 billion and be completed in late 2019.

Another pipeline could soon be carrying more Bakken oil out of North Dakota.
Two major pipeline projects have already been announced for the Bakken region in the past month, and now Kinder Morgan is discussing an expansion of the Hiland Crude System.
Hiland carries up to 88,000 bpd from North Dakota to Wyoming on the Double H Pipeline. Another pipeline, the Tallgrass Pony Express, then carries up to 375,000 bpd down to Oklahoma.
Kinder Morgan spokeswomen Katherine Hill, told the Bismarck Tribune the company will evaluate expansion “based on the level of interest and volume commitments obtained.” The company launched a binding open season on the Hiland System at the end of June.
Operators have been working to increase takeaway capacity from the Bakken as production in the basin continues to grow. In addition to two major new pipelines that were announced in June, Energy Transfer said it will expand the Dakota Access Pipeline to carry over 1 MMbpd out of the Bakken.

Jemena kicked off construction on the Atlas Gas Pipeline, located about 12 miles (20 km) southwest of Wandoan in Queensland, Australia.
The project will consist of an 8-inch, 37-mile (60-km) steel-coated, buried gas pipeline and compressor station. It will transport gas from Senex Energy’s Atlas gas field to the East Coast gas market via the Wallumbilla Gas Hub.
The Atlas is Queensland’s first domestic-only gas supply with all gas ear-marked for the domestic market. Executive General Manager of Gas Markets Antoon Boey said construction and commissioning of the project is expected to be complete before the end of 2019.
“We are currently in the early stages of construction, with around 90 people on site conducting clear and grade and stringing activities, and we expect this work to ramp up quickly over the coming weeks,” Boey said.
He added pipeline and processing facilities have been designed to enable additional expansion when more gas reserves become available.
Jemena recently awarded Spiecapag Australia a $20 million contract to construct the Atlas Gas Pipeline, while Australian energy and infrastructure services group Valmec has been chosen to construct the Atlas Compressor Station.
In total, Jemena will invest $140 million to construct the Atlas Gas Pipeline Project which is expected to create about 150 to 200 jobs in Queensland.

Enbridge delayed the start of an open season to solicit bids for contracted space on its Mainline oil pipeline system, North America’s largest oil-shipping network, three market, sources told Reuters.
The reason for the delay was not immediately clear. Enbridge plans to turn the Mainline system from a common carrier system in which shippers submit monthly bids for capacity to one that is mostly contracted for up to two decades.
The open season was meant to start in mid-July and last for two months, Enbridge said previously.
“We have been in discussions with interested shippers and are working to accommodate their needs. We anticipate on holding the open season soon,” Enbridge spokeswoman Tracie Kenyon said.
Locking shippers into long-term contracts offers Enbridge a chance to capitalize on delays to competitors’ plans to build pipelines, and secure future cash flow at a time of anxiety about market access.
The Mainline operates under a system in which customers nominate the barrels they want to move each month, generating criticism that some larger shippers inflate their nominations to game the system.
Earlier, Enbridge lowered the minimum oil volumes required to 2,200 bpd day from 6,000 bpd.

Indian natural gas company H-Energy Pvt Ltd postponed the startup of its LNG import terminal at Jaigarh to the fourth quarter of 2019. The terminal will connect to the national gas grid at Dabhol through a 36-mile pipeline that is expected to also be ready by the fourth quarter.
The company also plans to build a 400-mile pipeline connecting Jaigarh to Mangalore, which will likely be ready by 2023.
H-Energy, a unit of real estate group Hiranandani, wanted to start full commercial operations at the new floating LNG terminal at Jaigarh, on India’s west coast in the fourth quarter of 2018, but moved that back until the first quarter of this year.

TC Energy began a binding open season for crude oil transport on the, long-postponed Keystone Pipeline System.
The system runs from Hardisty, Alberta, to Steele City, Neb. It then splits, with one leg going east to Illinois and the other segment going south to the Houston, Texas, area.
That system transports about 20% of the oil from western Canada. The company did not say how much capacity might be available for shippers.
Pipeline Expansion, Reversal May Offset Pa. Refinery Losses
The Central Atlantic Region is boosting imports to offset the closure of Philadelphia Energy Solutions’ (PES) 335,000-bpd refinery after a recent fire, but a longer-term solution may involve the expansion or reversal of a major pipeline to bring more product from Ohio or Texas, according to a report by Morningstar Commodities Research.
The PES refinery accounted for 16.5% of gasoline and 27% of distillate supply to the Central Atlantic region, which includes New York, New Jersey, Pennsylvania, Delaware, Maryland and the District of Columbia.
The supply shortage will be filled by increased imports in the short term but could prompt expansion of Colonial Pipeline or the reversal of the Buckeye-owned Laurel Pipeline system, according to the report by Morningstar’s Director of Oil and Products Research, Sandy Fielden.
Colonial added 160,000 bpd of capacity in 2013 and 2014 through pump station and line improvements, but the system is currently running near capacity and any meaningful expansion would require new pipe in the ground, which Fielden noted, “would be both expensive and contentious because of the route through a highly populated area.”

Ongoing shipper interest prompted SemGroup and DCP Midstream to hold a supplemental open season for NGL transportation on the Wattenberg Pipeline, White Cliffs Pipeline and Southern Hills Pipeline, which will connect Weld County, Colo. to Mont Belvieu, Texas.
SemGroup is converting a portion of White Cliffs to NGL service, which should be on line in the fourth quarter. When combined with Southern Hills Pipeline, the system provides DJ Basin customers with increased NGL takeaway capacity and open access to the Texas Gulf Coast markets.
SemGroup owns 51% of White Cliffs Pipeline and is the operator. DCP owns all of Wattenberg Pipeline and 66% of Southern Hills Pipeline; it is the operator of both pipelines.
Oregon County Officials Push Back Against Pipeline
County officials in southern Oregon are asking the federal government to deny construction of a 230-mile natural gas pipeline, alleging that project developer Pembina has overstated its economic benefits and downplayed its environmental impact.
The Jackson County Board of Commissioners submitted a letter to the Federal Energy Regulatory Commission (FERC) unanimously opposing the Pacific Connector Gas Pipeline, which could carry natural gas to the proposed Jordan Cove LNG export terminal near the port town of Coos Bay.
In addition to the environmental and economic concerns, the commissioners cited land use questions as well. Pembina representatives said they checked with Jackson County to ensure that no large buildings were planned within a quarter-mile of the route but, according to the board, the county has no record of that request.

Libya’s national oil company said it reopened a pipeline that had been closed and resumed production at the country’s largest oil field.
The National Oil Corporation did not say who was behind the closure. The pipeline links the Sharara oil field to the port of Zawiya, on the Mediterranean coast.
The Sharara oil field, which produces about 290,000 bpd, is controlled by forces loyal to commander Khalifa Hifter.
His Libyan National Army launched an offensive on the capital, Tripoli, in April. The forces are now locked in a stalemated battle with militias loosely aligned with a U.N.-recognized government based in Tripoli. 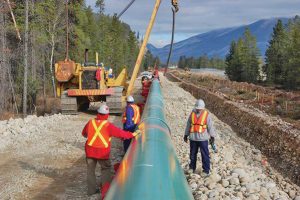 An indigenous-led group plans to offer $5.6 billion to buy a majority stake in the Trans Mountain oil pipeline from the Canadian government.
The expansion would triple the capacity of the pipeline carrying crude from Alberta to British Columbia’s coast, helping resuscitate an industry depressed by low prices and congested pipelines.
The group, called Project Reconciliation, said the investment will help alleviate First Nations poverty. Not all First Nations groups are on board, with some pledging to keep fighting expansion of Trans Mountain.