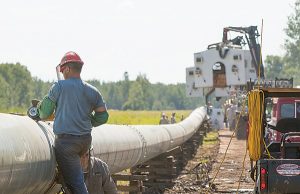 No Major Impacts on Lake Superior Found from Line 3 Pipeline

An updated environmental review released by a state agency found no serious threat to Lake Superior if crude oil ever leaked from a new pipeline to replace Enbridge Energy’s aging Line 3 across northern Minnesota.
State regulators ordered the update after the Minnesota Court of Appeals in June declared that an earlier review, issued in February 2018, was inadequate because it failed to specifically address the potential impacts of a spill into the Lake Superior watershed.
The updated review came a week after Enbridge began commercial operation of the Canadian section of its Line 3 pipeline.
Line 3 carries Canadian crude from Alberta and clips a corner of North Dakota on its way across Minnesota to Enbridge’s terminal in Superior, Wisc.. The replacement would double the capacity of the existing line, which was built in the 1960s and is increasingly subject to cracking and corrosion.
Environmental and tribal groups have been fighting the project because of the potential for spills in the Mississippi River headwaters region – an important wild rice growing area – and other pristine waters, and because the oil would contribute to climate change.
The update issued by the state Department of Commerce modeled potential spill effects where the replacement pipeline would cross Little Otter Creek.

Construction Advances on Trans Mountain Pipeline Ahead of Court Hearing 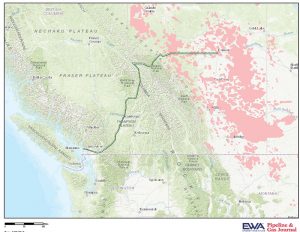 Expansion of Canada’s Trans Mountain oil pipeline entered a new phase, just two weeks before a court hearing in British Columbia that will decide whether Prime Minister Justin Trudeau’s government can complete the project.
The proposal to nearly triple Trans Mountain’s flow of crude to 890,000 bpd is one of three by the industry to expand pipelines extending from Alberta, where existing pipelines are congested, to U.S. refineries. TMX, as the project is known, moves crude to the British Columbia coast, where some shipments may reach Asian markets.
Canada is the world’s fourth-largest crude producer but struggles to get new export pipelines built over opposition from environmental activists have forced the Alberta government to curtail production and prompted an exodus of foreign investors.
Federal and Alberta politicians on Tuesday marked the start of a new phase of construction near Edmonton, Alberta, involving work along the pipeline’s right-of-way.

Ironwood Midstream Energy Partners II said it finalized the acquisition of West Texas gathering pipelines from a subsidiary of Twin Eagle Holdings and named a Twin Eagle executive to its management team and board of directors.
Ironwood Midstream Energy Partners said its newly formed Ironwood II would acquire Twin Eagle’s Gardendale and Asherton gathering systems, which together include 137 miles of active crude oil gathering pipeline with connections to multiple long-haul pipelines, allowing access to the U.S. Gulf Coast, Three Rivers and Houston markets. Interconnects include Plains All American Pipeline, Harvest Pipeline Company, NuStar Logistics L.P. and the upcoming EPIC Crude Oil Pipeline.
The Gardendale and Asherton systems span Dimmit and La Salle counties and are supported by long-term dedications totaling more than 124,000 acres.
Ironwood II is supported by an initial capital commitment of $400 million from EnCap Flatrock Midstream and management.

China created a centrally administered, state-owned pipeline company that combines all pipeline assets of the top three state-owned energy giants: China National Petroleum Corp., China Petrochemical Corp. and China National Offshore Oil Corp.
The change is designed to open access to China’s pipeline infrastructure to private and foreign energy producers. The open pipeline network will allow companies to focus on exploration without any additional costs to move the fuel to market.
Chinese Vice Premier Han Zheng attended a ceremony for newly formed national oil and gas pipeline company, saying it is an important measure to deepen the reform of the oil and gas system and the reform of state-owned assets and state-owned enterprises (SOEs).
The founding of the SOE is an important step forward in promoting the reforms of China’s oil and gas system and state-owned assets and enterprises, which has a significant impact on improving the allocation efficiency of oil and gas resources, promoting the development of the oil and gas industry, ensuring national energy security and better serving economic and social development, Han said.
Han, also a member of the Standing Committee of the Political Bureau of the Communist Party of China Central Committee, called on the company to help forge a fully competitive oil and gas market with effective concentrated transport through a unified pipeline network.
Beijing began exploring pipeline sector reforms nearly a decade ago, but NDRC finally formulated plans in 2017 while examining China’s natural gas system as part of its plan to replace coal with gas.
China is the world’s second-largest oil consumer and third-largest natural gas user, but its 82,600-mile (133,000-km) oil and gas pipeline network is less than one-fifth the size of the system in the United States, the world’s biggest oil and gas consumer.

Canadian oil producer Cenovus Energy Inc said it would spend nearly a quarter more in 2020, after the province of Alberta lifted some curtailments on new oil wells.
Alberta, Canada’s main oil-producing province, ordered curtailments on oil production to deal with pipeline bottlenecks that had led to a glut in crude storage and record price discounts.
The company said it plans to invest between $977.37 million (C$1.3 billion) and $1.14 billion (C$1.5 billion), nearly 22% higher compared to the mid-point of 2019 forecast.
“This budget positions us well to generate adjusted funds flow of more than C$3 billion ($2.28 billion) in 2020 under our price assumptions,” said Chief Executive Office Alex Pourbaix.
Higher spending is not a popular choice for shareholders, who prefer companies rather return cash to them. Investors want capital discipline, cleaner balance sheets and better management of cash flow from companies as oil prices remain volatile amid global trade tensions.
The Calgary-based company said it expects total production for 2020 to be between 472,000 boepd and 496,000 boepd, about 7% higher than its 2019 production forecast.

Enterprise Products Partners and Enbridge agreed to jointly develop a U.S. Gulf Coast crude export terminal that would load supertankers off Freeport, Texas, Enbridge said.
The pipeline operators plan to finalize a deal that would provide Enbridge an option to purchase ownership interest in Enterprise’s Sea Port Oil Terminal (SPOT), subject to SPOT receiving a deep-water port license, Enbridge said.
Enterprise, in late July, said it signed long-term agreements with oil major Chevron Corp that advanced the project. Enterprise was the first company – and still the only one – to make a final investment decision on a proposed U.S. deepwater port.
Rivals racing to develop similar projects include U.S. refiner Phillips 66, commodities trader Trafigura AG and privately held Sentinel Midstream. Carlyle Group dropped out of a $1 billion crude export terminal near Corpus Christi, Texas.
The Enterprise-Enbridge partnership comes a few weeks after the companies announced an open season to solicit shipper commitments for a 200,000-bpd expansion on their jointly owned Seaway pipeline system, which carries crude from the main U.S. storage hub in Cushing, Oklahoma, to U.S. refiners.
A jointly developed deepwater facility would open a direct route for U.S. crude exports from Cushing for barrels produced in Canada and midwestern U.S. fields, including in the Rockies and the Anadarko basin of Oklahoma, Andy Fielden, an analyst at Morningstar told Reuters.

U.S. energy regulators approved Tellurian’s request to start site preparation work at its proposed $27.5 billion Driftwood LNG export project in Louisiana.
The U.S. Federal Energy Regulatory Commission (FERC) said Driftwood could start vegetation clearing and grading, demolition and removal of existing buildings, and dredging of marine berths, among other activities.
The company plans to source natural gas from the Permian Basin to Driftwood via its proposed Permian Global Access Pipeline (PGAP), Tellurian said drew strong interest during an open season from West Texas natural gas producers seeking delivery to the rapidly growing natural gas market in Southeast Louisiana.
The $3.7 billion PGAP would be 625-mile, 42-inch interstate natural gas pipeline originating at the Waha Hub in Pecos County, Texas, and terminating at Gillis, La., north of Lake Charles, La. Construction could begin as early as 2021, and the project could begin service as early as 2023 with a capacity of 2 Bcf/d.
PGAP is one of three proposed pipelines that would comprise the estimated $7.3 billion Tellurian Pipeline Network, which is integral to its planned $15.2 billion Driftwood LNG export project near Lake Charles.
The pipeline network also includes the proposed Haynesville Global Access Pipeline (HGAP) and the Driftwood Pipeline. HGAP would be a 200-mile, 42-inch pipeline with capacity to transport 2 Bcf/d to the same interstate pipelines near Gillis. The 96-mile, 48-inch Driftwood Pipeline would provide 4 Bcf/d transport from Gillis to the Driftwood LNG facility.
“With FERC’s approval, we are doing some preliminary work on the site,” Tellurian spokeswoman Joi Lecznar said, noting, “We have progressed to completing over 27% of our engineering, and we have ordered some equipment in order to prepare for construction.”
Driftwood is designed to produce 27.6 mtpa of LNG or about 3.6 Bcf/d of natural gas. Tellurian has said it plans to start building the liquefaction plant in early 2020 and produce the first LNG from the facility in 2023.

Greece, Cyprus and Israel signed a deal to build an 1,180-mile (1,900-km) subsea pipeline to carry natural gas from the eastern Mediterranean’s rapidly developing gas fields to Europe.
Although Turkey opposes the project, the countries aim to reach a final investment decision by 2022 and have the pipeline completed by 2025 to help Europe diversify its energy resources.
European governments and Israel last year agreed to proceed with the EastMed project, a $7 billion pipeline expected initially to carry 10 Bcm annually from Israeli and Cypriot waters to the Greek island of Crete, on to the Greek mainland and into Europe’s gas network via Italy.
Last month a Turkish official said there was no need to build the EastMed pipeline because the trans-Anatolian pipeline already existed.After a legal delay, work resumed in late summer near Edmonton and in Burnaby, British Columbia, where the pipeline ends, in hopes of putting the project in service by mid-2022.