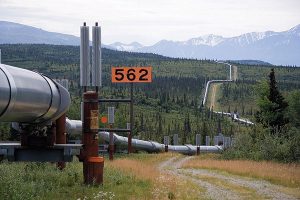 Federal Permit Granted for Alaskan Pipeline Project
A company seeking to develop a large oil project on Alaska’s North Slope has won a key federal permit. It already had received a permit from the U.S. Army Corps of Engineers for its Pikka development, which is planned west of Prudhoe Bay.
Papua New Guinea-based Oil Search has proposed building up to three drill sites, about 25 miles of roads and 35 miles of pipelines, a central processing facility, two bridges and an operations center with beds for 200 workers.
The permit is one of many the project will need to advance. The company also needs dozens of state and local permits.
Its project is in an area seen as a new hot spot for oil activity on the western North Slope, with ConocoPhillips also pursuing projects in the region. State analysts say the project has potential to contribute significantly to future Alaska production. Oil Search estimates the project could produce about 120,000 bpd.
So far this year, the Trans-Alaska Pipeline system, which was designed to move oil from the North Slope to a port in Valdez, has been averaging 515,000 bpd. At its peak, TAP transported 2.1 MMbpd. 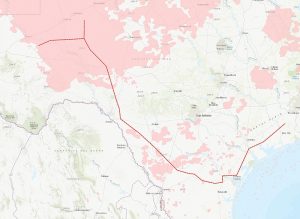 Marathon Petroleum said the proposed 475-mile Whistler Pipeline from West Texas’ Permian Basin to the Coastal Bend region of the state will become a reality, following a favorable decision by three chief investors.
The 42-inch pipeline will carry about 2 Bcf/d of gas from Waha to the Agua Dulce area of South Texas, both gas pricing hubs. The Whistler Pipeline will connect to several upstream links to plants in the Midland Basin and to the Agua Blanca Pipeline, and tap into the expanding Mexican and LNG markets.
Pending regulatory and other approvals, project developers expect Whistler to begin service during the third quarter of 2021.

Meritage Doubling Powder River Processing as Pipeline Nears Completion
Meritage Midstream will more than double the natural gas processing capacity on its super-system in the Wyoming’s Powder River Basin with the construction of a new, cryogenic processing plant located in Converse County, Wyo.
The plant will be served by a 20-inch trunk line that is nearing completion and will connect to Thunder Creek’s gathering system.
With a capacity of 200 MMcf/d, the plant is expected to come into service early in the third quarter of 2019, bringing Meritage Midstream’s total processing capacity in the basin to 380 MMcf/d. The complex is large enough to handle two additional 200 MMcf/d cryogenic processing plants, the company said.
The Steamboat I plant will also be connected to the Wyoming Interstate pipeline system for residue gas. NGLs currently flow to Phillips 66 and Oneok.

Tanzania, Zambia Planning $1.5 Billion Oil Pipeline
Tanzania and Zambia plan to build a refined products pipeline to transport petroleum between the two countries at a cost of $1.5 billion, Tanzania’s Energy minister said.
Medard Kalemani said in a presentation of his ministry’s 2019-2020 budget that the pipeline would run from the commercial capital Dar es Salaam to Zambia’s mining city of Ndola, about 840 miles away.
Kalemani told Reuters the pipeline would also have take-off points at Morogoro, Iringa, Njombe, Mbeya and Songwe regions on the Tanzanian side.
He did not give a time frame for when the project would kick off, but said that in the coming fiscal year, there were plans for a completed feasibility study. Financial details were not released either.
Tanzania and Zambia already have a crude oil pipeline between them transporting oil to Zambia, where it is refined in Ndola for local use.

$1.6 Billion Liberty Pipeline Construction to Proceed
Phillips 66 and Bridger Pipeline said they are proceeding with construction of the $1.6 billion Liberty Pipeline from the Rockies and Bakken production areas to Cushing, Okla.
The 24-inch, 350,000-bpd pipeline, to be built under new 50-50 joint venture between the two companies, will provide access via Cushing to multiple Gulf Coast destinations, including Houston, Corpus Christi and Ingleside, Texas. Initial service on the pipeline is targeted to commence as early as the first quarter of 2021, subject to receipt of applicable permits and regulatory approvals.
Liberty is one of two new joint-venture pipeline projects sanctioned by Phillips 66 with an estimated combined cost of $4.1 billion. The company announced plans to move forward with Plains All American Pipeline on construction of the Red Oak Pipeline system, which will transport crude oil from the Permian Basin to the same Gulf Coast destinations via the Cushing hub.
Phillips 66 will lead project construction on behalf of the joint venture and will operate the pipeline. Where feasible, Liberty will use existing pipeline and utility corridors and advanced construction techniques to limit environmental and community impact, the companies said.
The joint venture plans to hold a supplemental binding open season that will enable additional shippers to enter into long-term transportation services agreements. The project is underpinned with long-term shipper volume commitments.

Howard Energy Plans New Gathering System in STACK Play
Howard Energy Partners (HEP) executed an agreement with a major North American oil and gas producer to construct and operate a new natural gas gathering system located in the over-pressured area of the STACK play.
HEP’s new midstream infrastructure will be anchored by fee-based, long-term acreage dedications of 10,000 acres in Dewey and Custer counties of central Oklahoma.
The gathering system will be capable of low- and high-pressure service and have an initial capacity of 110 MMcf/d. The gathering system can be expanded to support multi-well pad development by HEP’s customer, as well as other producers in the area.
The initial phase of the project is expected to be operational in the third quarter of this year.

Phillips 66, Plains Sanction Red Oak Pipeline System
Plains All American Pipeline and Phillips 66 will proceed with construction of the Red Oak Pipeline system in a new joint venture to transport crude oil from the Permian Basin and Cushing, Okla., to Houston and multiple locations along the Texas Gulf Coast.
The joint venture plans to construct a new 30-inch pipeline from Cushing to Wichita Falls and Sealy, Texas. From Sealy, the joint venture will construct a 30-inch pipeline segment to Corpus Christi and Ingleside and a 20-inch pipeline segment to Houston and Beaumont.
The companies said Red Oak is underpinned with long-term shipper volume commitments and will begin service from Cushing to the Gulf Coast as early as the first quarter of 2021, subject permitting and regulatory approvals.
“Red Oak represents a capital-efficient industry solution that will utilize existing assets and provide pull-through benefits to our systems,” said Willie Chiang, CEO of Plains All American. “We look forward to working closely with Phillips 66 and our committed shippers to bring Red Oak into service and further optimize our assets upstream and downstream of the new pipeline system. We also look forward to creating jobs and supporting economic growth in Oklahoma and Texas.”
The Red Oak joint venture will lease capacity in Plains’ Sunrise Pipeline system, which extends from Midland to Wichita Falls, Texas.
Brazos Midstream Extending Delaware Basin System
Brazos Midstream executed gathering and processing agreements with Shell Exploration & Production to construct a new natural gas gathering system located in the core of the Delaware Basin.
Brazos’ new midstream infrastructure is anchored by 15-year, fee-based acreage dedications totaling 55,000 acres in Loving, Ward and Winkler counties. Brazos will construct 16 miles of high-pressure pipeline that will extend from the company’s existing gathering and processing systems and can be expanded further to support multi-well pad development by current producer customers, as well as other producers in the area.
Brazos also commissioned the Comanche III plant, a 200 MMcf/d cryogenic natural gas processing plant.