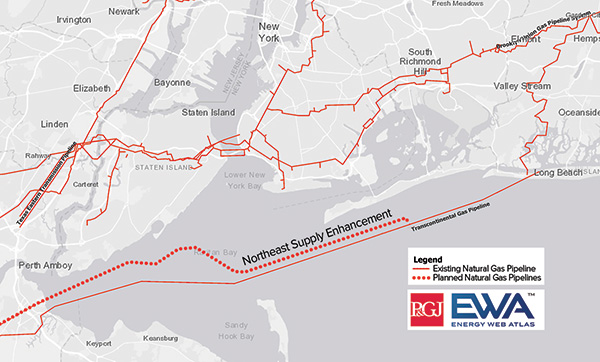 The Northeast Supply Enhancement project would expand the Transco pipeline, which extends from Texas to the Northeast Coast. It would allow National Grid to bring natural gas from Pennsylvania’s shale gas fields to the metropolitan region.

In denying  the permit, the state Department of Environmental Conservation (DEC) said the project “fails to meet New York State’s rigorous water quality standards” and “would cause impacts to habitats due to the disturbance of shellfish beds and other benthic resources.”

Chris Stockton, a spokesman for the pipeline developer, Tulsa, Okla.-based Williams Partners, said the DEC “raised a minor technical issue” with its application for water quality certification, and the company would resubmit the application “quickly.”

The pipeline was approved by the Federal Energy Regulatory Commission on May 3.

National Grid says the project is crucial because existing pipeline infrastructure is at capacity and natural gas demand is projected to rise 10% in the next decade in the New York City region. 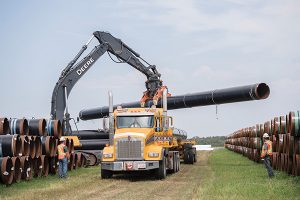 Enbridge said there is a risk its Line 3 replacement project could exceed its previous cost estimate of $6.71 billion (C$9 billion) because of delays to permits in the United States.

Line 3 will carry 760,000 bpd of western Canadian crude to U.S. markets. In March, Enbridge said the in-service date would be delayed by almost a year until the second half of 2020 because of slower-than-expected permitting in Minnesota.

Enbridge told analysts during a quarterly earnings call that as long as permits are in hand by the end of the year the project will start running in the latter part of next year.

“The late schedule likely means higher costs on the U.S. side although we are running under budget in Canada,” Enbridge Chief Executive Al Monaco said, adding returns remained “very robust,” and the company did not expect any cost overruns.

In addition, it is expected to cross the proposed Permian Highway Pipeline and Whistler Pipeline projects. The 400 MMcf/d pipeline is scheduled to come into service in the fourth quarter of 2019 to coincide with the commissioning of Cogent’s 200 MMcf/d Big Lake II plant. The plant will bring Cogent’s total processing capacity to 510 MMcf/d.

The Houston pipeline operator decided not to pursue its Permian Gulf Coast pipeline project in March after it was unable to obtain enough commitments to proceed, but it has received “significant” market feedback that its Midland origin would be attractive, Mears told investors in a conference call.

The pipeline, up to 24 inches in diameter, would run 500 miles from its Cushing terminal to its East Houston terminal and is expected to come into service in late 2020.

An extension added three months to the Voyager pipeline’s open season, which could draw shippers to a system with an initial capacity of at least 300,000 bpd.

Marathon Petroleum Corp. is merging two of its oil and gas pipeline, transportation and storage operations for $9 billion.

MPLX and Andeavor Logistics are both master limited partnerships, majority-owned by Marathon, which raised the possibility that it might combine the two late last year.

The enterprise value of the deal is listed at $14 billion, and it is expected to close in the second half of the year.

Low oil prices are helping to push consolidation efforts along in the energy sector. Aside from Marathon’s actions, Anadarko Petroleum had been the subject of a bidding war between Chevron, which pulled out, and Occidental Petroleum.

Andeavor, formerly known as Tesoro, has refineries in California, Minnesota, New Mexico, North Dakota, Texas, Utah, Washington and Alaska. The companies are all based in Findlay, Ohio.

Norway-Poland Gas Link on Track for 2022 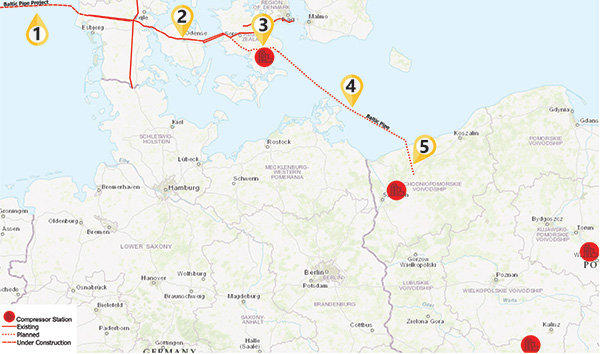 The Eastern European country sees the Baltic Pipe as a way to diversify its gas supply, most of which is currently imported from Russia under a long-term contract with Gazprom that expires in 2022.

“It is going well. For the moment it is in accordance with the schedule,” Czaputowicz told a news conference after meeting Norwegian counterpart Ine Eriksen Soereide in Oslo.

The Polish minister told Reuters the construction of the Baltic Pipe could only increase the interest of Polish energy firms, such as state-run PGNiG and refiner Lotos, in investments in Norway.

“Definitely if the Baltic Pipe is constructed, it will be another argument for investing in the fields here in Norway … Knowing the philosophy of the company (PGNiG), they are very interested,” he said.

PGNiG, which agreed in October to buy Equinor’s 42.38% stake in the Tommeliten Alpha gas and condensate field in Norway, has said it plans to increase its gas output in the country via acquisitions.

The Trans Adriatic Pipeline (TAP) laid its first offshore pipes in Albanian waters in the form of 1.1 miles (1.8 km) of welded steel lowered by Saipem’s Castoro 10.

The offshore pipeline section will be 65 miles long (105 km) upon completion and will link the Albanian and Italian coasts. Of that, 23 miles (37 km) will be in Albanian waters and 16 miles (25 km) will be in Italian waters. The rest will be in international waters.

The 575-mile (878-km) TAP will transport gas from the Shah Deniz II field in Azerbaijan through the European section of the Southern Gas Corridor to Europe in 2020.

A gas pipeline in the Baltic Sea will begin operation in early 2020 with a capacity of between 97 MMcf/d and 133 MMcf/d from Estonia to Finland, Estonian partner Elering said.

Flows the other way, from Finland to Estonia, will start with a capacity of between 144 MMcf/d and 200 MMcf/d, the company said. Capacities are calculated for the starting period of winter-spring of 2020.

Finland, Estonia and Latvia, which will be served by the pipeline, agreed to form a joint gas market earlier this year.

According to the agreement, gas will move between the three countries next year without additional costs. The volume of the Finnish-Estonian-Latvian gas market is about 137 Bcf per year.

The $336-million (300 million-euro) pipeline is mostly funded by the European Union and will allow Finland to diversify the source of its gas imports, which were previously supplied solely by Russia’s Gazprom.

Snelson has been awarded a contract to complete the final phases of the Saginaw Trail Pipeline project in Lower Michigan. The project should be completed in December 2020.

Phase 3 of the project, which includes installation of 29.2 miles of larger pipeline between Clio City Gate and Grand Blanc City Gate, is expected to begin in Spring 2019. This phase not only replaces the existing 12- and 16-inch pipe with new 24-inch pipeline, but also reroutes the path around the urban area of Flint.

Phase 4, beginning in 2020, will replace 28.2 miles of pipeline between Grand Blanc City Gate and Clawson Control. Groundwork, including surveying and obtaining necessary easements and permits, is already underway.

In all, the project will replace 78 miles of infrastructure, which has been in place since the 1940s.

The entire project is scheduled for completion in four phases over four years. With Phases 1 and 2 complete, Snelson now heads into the significantly larger final two phases.