Canada extended the deadline for a decision on whether to push forward with the expansion of the Trans Mountain oil pipeline to June 18 from mid-May, the government said.

The Trans Mountain expansion (TMX) project would nearly triple the amount of crude flowing from Alberta’s oil sands to British Columbia’s coast, but has been hampered by regulatory delays and opposition from indigenous groups, environmentalists and the British Columbia government.

Amarjeet Sohi, Canada’s minister of natural resources, said the delay would give the federal Liberal government more time to consult with indigenous groups affected by the pipeline.

“The Government has consistently said that a decision would only be made on the project once we are satisfied that the duty to consult has been met,” he told Reuters.

However, the Conservative shadow minister for natural resources, Shannon Stubbs, said the delay meant another summer construction season would likely be missed.

“There is also still a very real risk that the Liberals will cancel this project for political reasons,” she said in a news release.

Last August, the Canadian government bought the pipeline from Kinder Morgan Canada for $3.37 billion (C$4.5 billion) to ensure it gets built.

PGAP is a 42-inch interstate natural gas pipeline originating at the Waha Hub in Pecos County, Texas, and terminating at Gillis, La., north of Lake Charles. The pipeline would connect the prolific Permian Basin in Texas to the rapidly growing natural gas market in Southwest Louisiana.

GAP is expected to cost $3.7 billion to construct and will have the capacity to transport at least 2 Bcf/d of natural gas. Construction could begin as early as 2021, and the pipeline is targeted to be in service as early as 2023.

PGAP is part of Tellurian’s proposed pipeline network. The network represents an overall investment of $7.3 billion in U.S. infrastructure, and is expected to create 15,000 jobs in Texas and Louisiana.

The investment is incremental to the $15.2 billion investment that Tellurian plans for Driftwood LNG, a proposed LNG export facility near Lake Charles, La. 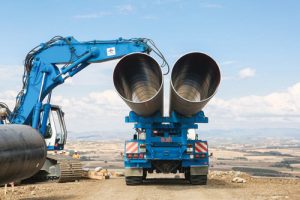 The Trans-Adriatic Pipeline (TAP) has crossed the rocky mountains of Albania, putting it on track to start delivering gas to Europe next year.

Stretching 546 miles (878 km) from Turkey’s border across Greece, Albania’s mountains, and the Adriatic Sea to Italy, TAP is a cornerstone of the European Union’s energy security policy to wean the bloc off Russian gas.

The pipeline will transport up to 10 Bcm of natural gas per year from the Shah Deniz II field in Azerbaijan to Italy from next year.

Out of TAP’s total cost of $5.04 billion (4.5 billion euros), the section across Albania has cost a third of that due to the challenging terrain.

“We are proud to have risen to this challenge and delivered a world-class pipeline crossing mountains of over 2,000 meters above sea level,” TAP Albania Manager Malfor Nuri told Reuters, adding that TAP is the biggest foreign investment in Albania.

Most of the pipe laying has now been done in Greece and Albania. Apart from the terrain, the developers had to deal with 100 times more owners in Albania than they would have to other European countries and double the number of landowners it had to deal with in Greece, representatives of TAP AG in Albania said.

The pipeline crossed rivers 19 times, including the Seman River eight times. Building work was halted at times to let doves build their nests under environmental rules.

Meanwhile, in Italy, work is being carried out to build the receiving terminal and an onshore pipeline.

TransCanada President and CEO Russ Girling called the two developments “extremely important” to the company, adding, the projects “provide much-needed takeaway capacity for our customers, while also growing our extensive footprint in the Appalachian Basin.”

The pipeline is capable of providing 2.7 Bcf/d of natural gas to the TCO Pool and Leach markets on the Columbia Gas Transmission System. MXP is underpinned by long-term contracts with customers. 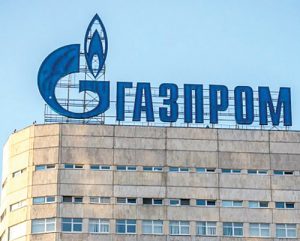 The developers of a natural gas pipeline from Russia to Germany applied for a third route south of Denmark’s Baltic Sea island of Bornholm, in a bid to overcome objections from the country.

The Danish Energy Agency said Nord Stream 2 applied for an alternative route in the seas southeast of Bornholm in Denmark’s exclusive economic zone. It could not say when a permit might be granted, according to AP.

Switzerland-based Nord Stream 2 confirmed it had been asked to submit an application for another route, saying the need for a new option “can only be seen as a deliberate attempt to delay the project’s completion.” The company added European consumers could lose as much as “at least 20 million euros ($22.3 million)” a day.

The planned Baltic pipeline will transport natural gas via a 764-mile (1,200-km) pipeline from Russia to Europe.

(PGJ) – Jordan and Iraq are nearing final approval for an $18 billion oil pipeline that would carry 1 MMbpd of oil from the Iraqi city of Basra through the Jordanian port of Aqaba and across the Red Sea to Egypt.

The head of Jordan’s Lower House Energy Committee, MP Jamal Gammoh, said that both countries are accelerating preparations for the pipeline after an agreement was reached between all three nations to extend the pipeline into Egypt.

This new source of oil would supply Egypt’s needs while opening up Iraqi oil to new export opportunities. Planning arrangements, including the pipeline’s track, components, absorptive capacity, funding sources, and operational means have already been completed.

If approved by the Iraqi Council of Ministers, a final agreement will be signed between Jordan and Iraq. Unstable security conditions in areas along the proposed pipeline’s path have led to delays, according to the Iraqi Ambassador in Amman, Safia Al-Suhail.

Jordan has been promised 10,000 bpd from Iraq, which accounts for 7% of the country’s needs. Jordanian officials hope the new pipeline will reduce imports from Saudi Arabia, where it purchases oil at international prices for transport on tanker ships.

Concho Resources and Frontier Midstream Solutions IV signed an agreement to create the Beta Crude Connector (BCC), which will include a 100-mile gathering system with an additional capacity of 150,000 bpd.

BCC will file for FERC authority to operate as a common carrier pipeline and solicit interest from other producers and marketers for capacity on the new system.

“Through the joint venture, we will leverage Frontier’s midstream expertise and enhance the value of our high-quality footprint in the Midland Basin,” said Jack Harper, president of Concho. “Importantly, this is a compelling investment opportunity that we can make with no changes to our capital plans.”

The project, located in the Northern Midland Basin, also consists of 250,000 barrels of crude oil storage facilities, as well as truck terminals. Concho agreed to enter into a long-term acreage dedication agreement with BCC.

The Marten Hills Pipeline System will extend 53 miles (85 km) and consist of crude oil and condensate pipelines and related facilities. The system is expected to come into service in the second quarter of 2020.

The system will gather crude oil production from the Clearwater formation, described by the company as “emerging as an extremely economic play with low extraction costs using modern multilateral horizontal drilling.” The system will deliver blended crude oil to an existing third-party takeaway pipeline to serve the Edmonton, Alberta, hub and refining market.

Condensate will be received from a third-party pipeline and delivered to production batteries for diluent blending.

The project already has long-term transportation agreements in place with three of the region’s largest producers, which accounts for 40% of the system’s capacity. The agreements include acreage dedications of about 450,000 acres.