The New York regulatory agency that failed to act on a water quality certification for Williams’ planned Constitution Pipeline said it will fight a federal ruling that it waived the decision through inaction. In spite of the challenge, the project may move ahead to completion by 2021.
The FERC decision moved the project forward, although it still requires U.S. Army Corps of Engineers approval before construction can begin.
“The New York State Department of Environmental Conservation (DEC) disagrees with FERC’s decision that, once again, sides with the fossil fuel industry over protecting our environment. DEC will continue to vigorously defend our decision and our authority to protect New York State’s water quality resources,” the agency said in a prepared statement after the FERC decision.
The 125-mile, 30-inch Constitution Pipeline would have the capacity to transport about 650 MMcf/d from the Pennsylvania Marcellus Shale to consumers in New York.
FERC issued its Final Environmental Impact Statement on the project on Oct. 24, 2014, concluding that environmental impacts would be reduced to “less than significant levels” with the implementation of proposed mitigation measures by the company and FERC.
A report from Height Capital Markets analysts projected that “barring any permit reversals or unfavorable court decisions, we believe the project could enter service in 2021.” 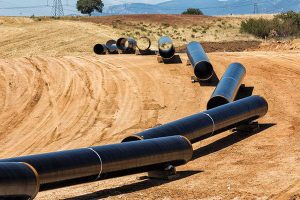 A U.S. appeals court barred PennEast Pipeline from using a federal law to seize properties controlled by the state of New Jersey in order to build a proposed $1 billion natural gas pipeline.
The 3rd Circuit court said the U.S. Natural Gas Act does not allow companies to condemn state-controlled land in federal court because states enjoy sovereign immunity from such actions under the 11th Amendment of the U.S. Constitution.
PennEast obtained approval from the U.S. Federal Energy Regulatory Commission (FERC) to build the pipeline from Pennsylvania to New Jersey in January 2018.
New Jersey, which opposes construction of the pipe, did not consent to
PennEast’s condemnation suits on 42 of the 131 properties it controls. The state holds possessory interests in two of the properties and non-possessory interests in the rest, most often through easements requiring the land be preserved for recreational, conservation or agricultural use.
PennEast needs the land to build its 120-mile (190-km) pipeline, which is designed to deliver gas from the Marcellus shale formation in Pennsylvania to customers in Pennsylvania and New Jersey.
The 3rd Circuit decision reverses an earlier district court ruling that had allowed PennEast to condemn the state controlled properties. 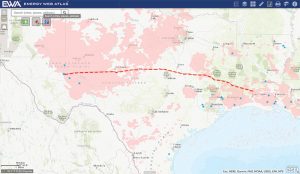 Tellurian asked FERC to initiate a review of its proposed Permian Global Access Pipeline (PGAP) following an oversubscribed open season for the 625-mile natural gas project from West Texas to Southeast Louisiana’s growing LNG export market.
In its 12-page FERC request to initiate pre-filing review of PGAP, Tellurian emphasized the economic and environmental benefits the 2.3 Bcf/d, 42-inch pipeline would provide as an outlet for stranded natural gas associated with Permian Basin oil production.
“Of critical importance to the Permian Basin, all of Texas and Louisiana and globally, PGAP will facilitate the reduction of venting and flaring of natural gas and will continue to foster the displacement of burning fuel oil and coal for fuel via fuel switching to natural gas,” the filing said.
Natural gas production from the Permian region is expected to exceed 16 Bcf/d, at a minimum, by 2023 to 2025, the company said, while growth of the petrochemical, industrial and LNG export industries in the Southwest Louisiana-East Texas region are expected to increase natural gas demand in the area by approximately 14 Bcf/d by 2025.
PGAP construction could begin as early as 2021, and the project could begin service by late 2023-early 2024. To meet that timeline, Tellurian anticipates receiving FERC approval for use of the pre-filing process in this fall, according to the filing.
PGAP is one of three proposed pipelines that would comprise the estimated $7.3 billion Tellurian Pipeline Network, which is integral to its planned $15.2 billion Driftwood LNG export project near Lake Charles.
Oil and gas pipeline company Energy Transfer said it would buy smaller rival SemGroup Corp for $1.35 billion and build a 75-mile oil pipeline to strengthen its oil transportation, terminaling and export operations.

NuStar Energy announced it has completed and is moving volumes on three key pipeline projects that will significantly expand the partnership’s capacity to move Permian crude oil to Corpus Christi for export, and to move refined products into Northern Mexico.
On the heels of completing a project connecting the partnership’s existing 16-inch pipeline in South Texas to the Plains Cactus II pipeline that transports WTI volumes from the Permian Basin to South Texas, NuStar completed the second stage of its WTI export project, a new 8-mile, 30-inch pipeline to transport crude oil from a connection to the Plains Cactus II long-haul pipeline in Taft, Texas, to NuStar’s Corpus Christi terminal.
NuStar is also building 600,000 barrels of additional storage at the Corpus Christi terminal, which will bring its total capacity to 3.9 million barrels. This storage expansion is expected to be completed in December 2019.
NuStar also began moving volumes on its newly expanded Valley Pipeline System in South Texas after increasing the system’s capacity to supply refined products from Corpus Christi to the Rio Grande Valley and Northern Mexico. The expansion essentially doubled the pipeline’s capacity from 45,000 bpd to 90,000 bpd.
The expansion included adding a 75-mile loop of 12-inch pipeline between Seeligson and Edinbur, Texas, and making improvements at pump stations along the system, which includes delivery points in Brownsville, Edinburg, and Harlingen, Texas.

Work on a pipeline to export Ugandan oil has been suspended, an industry official said, after Tullow Oil’s plan to sell a stake in the project to France’s Total and China’s CNOOC was called off.
“All East African Crude Oil Pipeline (EACOP) activities including tenders have been suspended until further notice because of the collapse of the deal,” the official told Reuters.
The stake sale was called off due to a tax dispute with the Ugandan authorities.
“The collapse has meant uncertainty in terms of who will meet what cost in developing the project, which is meant to have a similar shareholding structure like that of the oilfields,” the official said.
Uganda discovered crude oil reserves about 13 years ago, but commercial production has been delayed partly because of a lack of infrastructure, such as an export pipeline.
The 900-mile (1,445-km) EACOP, costing $3.5 billion, would pass through neighboring Tanzania to the Indian Ocean port of Tanga.
SemGroup Buy Prompt’s Pipeline Construction
Energy Transfer will gain control of SemGroup’s crude oil terminal on the Houston Ship Channel, and to connect it with its Nederland, Texas, terminal, the company said it will construct a pipeline between the two terminals.
Energy Transfer will also add SemiGroup’s crude oil gathering assets in the DJ Basin in Colorado and the Anadarko Basin in Oklahoma and Kansas, as well as crude oil and natural gas liquids pipelines connecting the DJ Basin and Anadarko Basin with terminals in Cushing, Okla.
The deal, which includes 0.7275 shares of Energy Transfer for each outstanding share of SemGroup, represents a premium of 65.4% to SemGroup’s at the time of the announcement.
Including SemiGroup’s debt, the enterprise value of the deal is $5 billion. The transaction is expected to close in late 2019 or early 2020.
LM Energy Completes First Phase of Touchdown Gathering System

LM Energy Holdings said it has completed Phase I of its Touchdown Crude Oil Gathering System in the northern Delaware Basin and will begin transporting crude oil in October for contracted customers in Eddy County, N.M.
Dallas-based LM Energy said it started construction when it launched a binding open season in mid-July to obtain commitments for the greenfield system, initially consisting of about 50 miles of gathering and transportation lines.
In Phase II of the project, LM Energy will extend the crude oil gathering system and construct a gas gathering system for a combined total of more than 100 miles of low-and high-pressure pipelines. The company said Phase II will begin operations in the first quarter of 2020 and serve multiple customers dedicated to both the crude oil and gas gathering systems.
“We are constructing our systems with new large diameter pipelines purpose-built for modern well performance,” said Elliot Gerson, managing partner of LM Energy. “The high-rate-of return drilling, with oil-weighted economics and associated gas, is the ideal environment for a crude oil and natural gas midstream provider.”
TurkStream 2nd String to Cross Bulgaria, Serbia, Hungary
The second leg of the TurkStream gas pipeline is planned to go through Bulgaria, Serbia and Hungary, Russian Energy Minister Alexander Novak announced, as Moscow prepares to phase out gas transit to Europe via Ukraine.
In 2006 and 2009, Russia temporarily halted its gas transit via Ukraine, alleging that Kiev was “siphoning” gas meant for Europe. Ukraine denied any wrongdoing. Since then, state-controlled Gazprom has sought to bypass the country.
Four sources familiar with Moscow’s position told Reuters that Russia wants to strike a short-term deal with Kiev on gas transit to Europe in order to buy time to complete pipelines that will bypass Ukraine.
Construction of the twin, 32-inch TurkStream pipeline began in May 2017. Each of the twin subsea pipelines, which cross the Black Sea from Russia to Turkey, has an annual throughput capacity of 15.75 Bcm.
The first string is intended for Turkish consumers, while the second string was built to deliver gas to Europe.
APA Group Completes Gas Pipeline, Brisbane River Crossing

APA Group completed the installation of a gas pipeline in Australia that included a 300-foot (905-meter) crossing under the Brisbane River.
APA contracted Diona Civil Engineering Contractors, with additional support from Coe Drilling, for the pipeline installation, completed at a depth of 33 feet (10 meters) below the river, as part of the Murarrie Looping Project.
The HDD and pipe pull effort involved a 500-ton drill rig, two cranes and six excavators. It was completed over 24 hours, using 70 workers.
During installation, 300 feet of DN 300 gas pipe was pulled under the Brisbane river with detailed planning in design and methodology required to ensure accuracy of the alignment installation.
The new 12-inch (300 mm), high-pressure steel pipeline is a duplication of the Murarrie Pipeline, which provides gas to more than 88,000 customers.